Paris, France (IAAF) – Ethiopia’s Boru Feyse Tadese set a world-leading time and women’s course record of 2:21:05 today (7) at the 37th edition of the Schneider Electric Marathon de Paris, an IAAF Gold Label Road Race, while Kenyan Peter Some was the surprising winner of the men’s race in 2:05:38.

With cool temperatures and sunny sky, the weather conditions were ideal for the start of the Paris Marathon at 8:30. The women’s race started very fast, as the leaders ran 16:44 at 5km, faster than the 17:01 by Ethiopian Tirfi Beyene ran when she broke the Paris Marathon course record last year (2:21:37).

After one hour, pre-race favourite Eunice Kirwa Jepkirui of Kenya – the fastest of the field with a 2:21:41 personal best – led from Ethiopian’s Merima Mohammed, winner in Houston this year with 2:23:37, Amane Gobena, winner in Seoul and Osaka in 2010, and Marathon debutante Imana Gutemi.

But it was another Ethiopian, World Half-marathon silver medallist Boru Feyse Tadese, who then moved into the lead and went through the half-way mark in 1:10:08 – the fastest ever intermediate time in Paris.

The 25-year-old ran very steadily and progressively built up her winning margin, disposing of Jepkirui and Mohammed before the Bois de Boulogne. Her final time, 2:21:05, was easily a world-leading time, and a Paris Marathon course record. After her 68:35 at the RAK Half Marathon in February, this was another PB for Tadese who improved her previous best by more than two minutes.

She now moves to 25th on the world all-time list, one place ahead of Ingrid Kristiansen’s former long-standing World record (2:21:06).

Team-mate Mohammed held on for second place in 2:23:14, 20 seconds ahead of Jepkirui. Read more 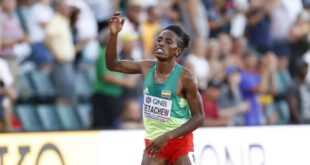 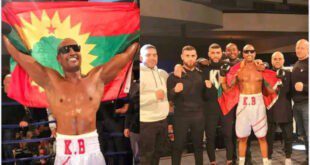